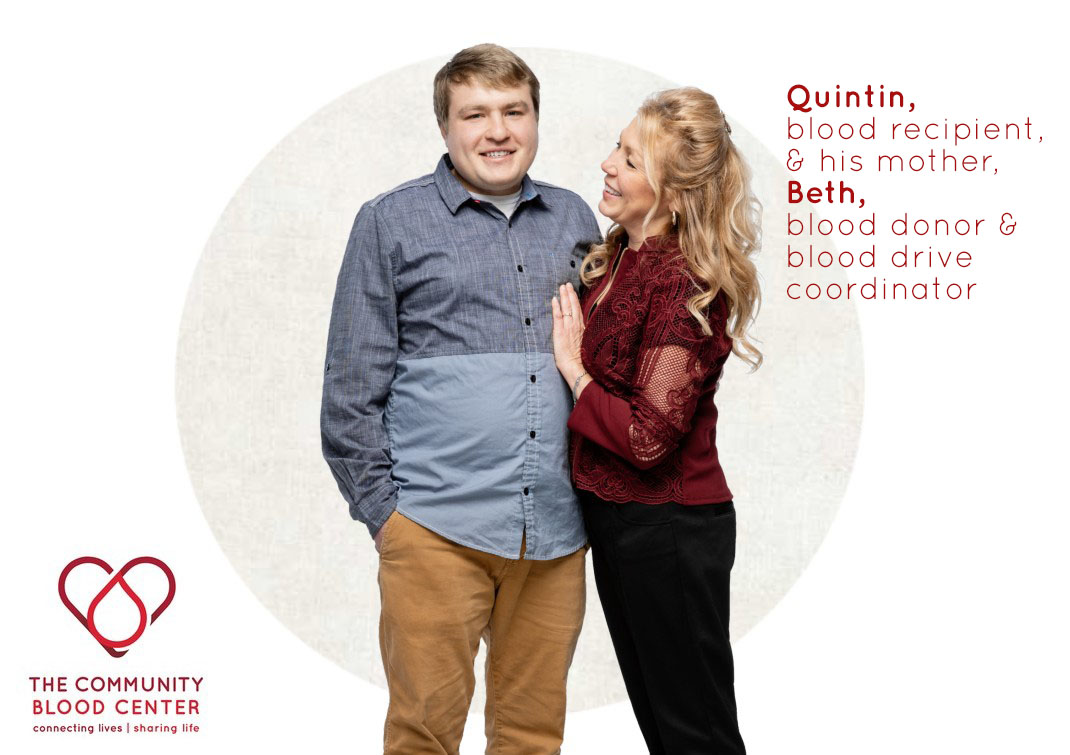 We often speak of the connection that exists between blood donors and blood recipients; the mission of “Connecting Lives, Sharing Life,” after all, is at the heart of The Community Blood Center. In the case of Quintin Knutzen and his mother, Beth, the throughline from blood donor to recipient is even more meaningful.

Today, Quintin Knutzen is 26 and mostly healthy. None of this would be possible, though, without blood donations, and this is an uncertainty that Beth remembers well.

Quintin was born with a rare congenital heart defect known as transposition of the great arteries, where the two main arteries leaving the heart are reversed. This causes improper circulation throughout the body, and is typically fatal if not treated. Additionally, Quintin was born with a hole in his heart, which would also need surgical attention.

Quintin’s first operation, to insert an artificial conduit and repair the hole in his heart, was at age two. His next surgery, five years later, replaced a heart valve with an artificial one. Each surgery required multiple platelet and red blood cell transfusions, which allowed Quintin to enjoy, in his estimation, a relatively normal childhood.

Seeing the role that blood played in her son’s health, Beth realized the importance of blood donation and expressed a desire to get involved. For more than twenty years, Beth has been the driving force behind The Community Blood Center’s blood drives at Emanuel Lutheran Church in New London.

Yet, with a condition such as Quintin’s, there was no doubt that another surgery would be in his future as he gradually outgrew the tubing placed in his heart as a child.

It was in 2018 that this eventuality became reality. During a work trip to Denver, CO, Quintin developed a blood infection that attacked the weak and foreign parts of his body, including his artificial heart valve. Knowing that the artificial valve must be replaced before the infection could be treated, the Knutzens made the decision to go ahead with a third open-heart surgery.

Then, toward the end of the 12-hour surgery, Quintin began bleeding. Thankfully, there was sufficient blood on hand to get his bleeding controlled, and Quintin’s blood levels and heart rate stabilized.

“I don’t even want to think about what it would be like if [the surgeon told me], ‘We know what to do, but we can’t because there’s no blood,” Quintin says.

And as Quintin’s life has now returned to normal, the significance of the donated blood isn’t lost on Beth.

“Without it,” she says simply, “he would not be here.”