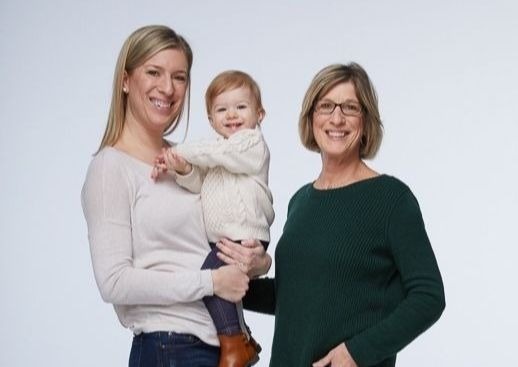 What leads a person to donate blood? More specifically, what leads a lapsed donor to find a blood drive or make an appointment after several years away? In the case of Dawn of Appleton, the decision was simple.

“I’d donated every so often for maybe ten or fifteen years, and then I just sort of stopped,” she explains. “But then when Hollie had Nora….” And here, she trails off somewhat.

Hollie is Dawn’s daughter, and Nora is her nearly-new granddaughter. But while the photo shown here certainly makes it look like things are as idyllic as can be, this nearly wasn’t the case.

In September of 2017, Hollie was set to welcome her new baby daughter into the world. However, not long after delivery, some pretty severe complications set in.

“I was in recovery, but I just kept bleeding,” Hollie remembers. “It turned out I’d ruptured an artery, and I was losing a lot of blood in a hurry.” After hours of continual bleeding, it was discovered that a hematoma had developed in her lower abdomen, and that her blood pressure, hemoglobin and hematocrit levels were dangerously low. Following a consultation with her doctor, Hollie and her husband made the critical decision to accept a blood transfusion.

“I only needed about two units of blood, but that seemed to make all the difference,” Hollie says today. “It was because of this donation that I was able to enjoy those first precious days with my new baby, and both of those things — the blood, and then getting to share that time with Nora — were such an amazing gift.”

In the time since that memorable event, Hollie’s need for blood has stirred something in her mother, Dawn, as well.

“Almost immediately, I started donating again, and I’ll keep donating,” she says. “I really just hope that my donation can help someone, the way that it did for Hollie.”